Abstract:
Many school-age children demonstrate significant difficulties in the classroom, in multiple related areas. This case study is about a holistic approach that was implemented in conjunction with other school-based interventions. The student was in the second –grade and exhibiting scholastic backwardness, poor spellings and inability to read. He had severe academic and social difficulties.

After completing a pull-out remedial program and curriculum- based remediation, the student showed significant gains in academics, social interactions, confidence and emotional regulation. The increase in auditory and language skills (including a gain on the Phonological Awareness Test) positively impacted his academics, particularly decoding and early literacy skills. Socially, Abhay is now confident when working with peers during academic tasks. He presents as a generally happy child who is now excited to learn and be in school.

Abhay had repeated Senior Kindergarten in his previous school. He had joined Vidya Valley in the 1st Grade.

He was in the second-grade and he demonstrated significant difficulties in early literacy skills and visual processing. He was diagnosed with a Specific Learning Disorder with moderate impairment in reading, spelling and reading comprehension. His IQ was 81- in the dull normal range.

He belonged to a family where English was the second language. Abhay’s mother was upset with him and told him she would not come to school if he did not get good scores in his test. He was also sent for tuitions for 2 hours and had no time to play or indulge into any sport. She also reported he is very forgetful and cannot recall simple things like what he had for breakfast the previous morning. Family members would mock him for his memory issues. He did not have friends, often used foul language in a range of anger.

Abhay’s teacher reported his skills were significantly below grade-level in phonological awareness, decoding, writing and listening. Abhay was unable to write the letters of the alphabet sequentially. When asked to spell, he did not exhibit letter- sound association.  He started receiving Academic Intervention Support services in reading and spelling (two 30-minute group sessions per week), as well as curriculum-based remediation (two 30-minute sessions per week) in school, for 6 months. Abhay, mentioned he did not understand instructions and wanted someone to translate them for him in his mother tongue Marathi. To assist him with the same and supplement the remedial program, additional skype sessions were conducted. This was found necessary to also reinforce the   English vocabulary taught in school.

The following tests were conducted for further investigations and interventions: 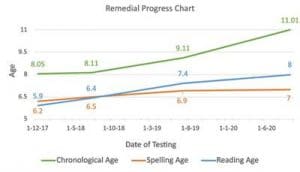 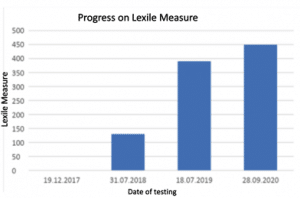 (A Lexile text measure represents a text’s difficulty level on the Lexile scale. When used together, they can help a reader choose a book or other reading material that is at an appropriate difficulty level. The Lexile reader measure can also be used to monitor a reader’s growth in reading ability over time.)

He will however benefit from concessions and modifications during tests and exams. He will continue to require a planned and systematic approach in remediation. Though he is proficient in his mathematical ability, he struggles to comprehend the instructions in the sums. He showed great progress on the Rx for math multisensory program and will continue receiving help for the present academic year.

The progress has made Abhay now a self-assured child and he looks forward to attending school. He will require remediation for a long period of time. He will also benefit from sessions in study skills, and some guidance to enhance his ability to recall.