Asteroids have been a part of our solar system for millions of years and are said to be remnants of celestial objects. Asteroids are often termed as minor planets or Planetoids. Despite their size, asteroids can be dangerous. Many have hit Earth in the past, and more will crash into our planet in the future. That’s one reason scientists study asteroids and are eager to learn more about their numbers, orbits and physical characteristics.

To understand about asteroids, their hazardous impacts, and to educate students across the globe, space agencies have been organising outreach programs. I came to know about one such programme and registered in the International Asteroid Discovery Project with Trisha Singhal as my team mate. These programs promote awareness, provide knowledge and help discover asteroids. They also help participants to learn about the possibility of asteroid impact and its effect on human civilization. While working on this project, we gathered a lot of information and on weekly basis, we were sent different data sets by NASA to work upon for the complete duration of April Month. We did not want to spend our vacations sitting idle or spending time on internet for the meaningless tasks, so thought of enrolling for something which will fuel our passion for space science and Astronomy.

Each data set consisted of 4 pictures and we were expected to re-name the known objects, blink the pictures, spot the moving objects, spend hours to cross check the characteristics of Asteroid in contrast to the moving objects, once closer to our expectation; freeze it, note down the co-ordinates and send the reports to NASA for verification.

We discovered total of 9 moving objects of 28 data sets, out of which 2 had qualified the stage and have been confirmed as Preliminary Discoveries by NASA and yet further have to be qualified under Final Discoveries. Through this project we learnt a lot about Astronomy and Space Science and we feel this will help us set up a base for fulfilling our dreams.

Certificate of Excellence and Screenshot of mention of our discovery on IASC site. 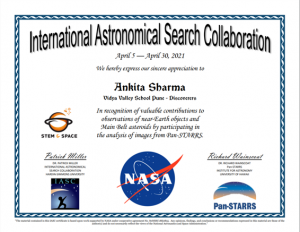 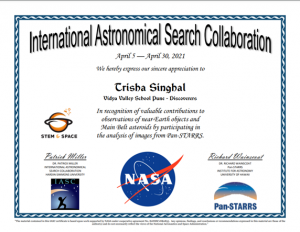