My Experience at Samsara 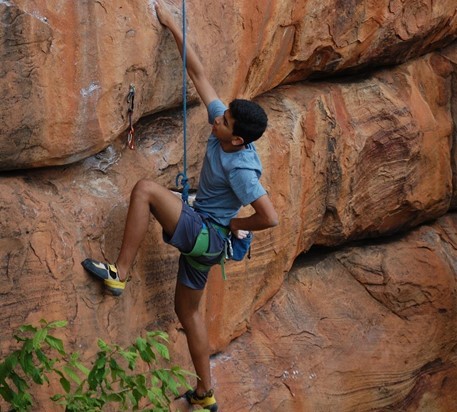 Samsara means the cycle of life and rebirth of life. My experience on Samsara was somewhat similar. It was our third trip to Badami, in the previous two trips we had gone to check out the route and get a feel and an idea of what such a route was actually like. On the third trip, there were a few fellow climbers from Bangalore who were also working on the route and were looking quite strong on it.

We decided to give the route a shot with the other climbers during the trip and try to work on the moves and clear them. There are two ‘CRUX’ or hard parts of the route, one at the start and the other at the end. The lower part is slightly longer and is more technical while the upper crux just has a few small holes.

On my very first day working the route I was able to clear the lower crux and go to the upper crux in one go which was a surprise to me. Over the next few days, I was able to dial these moves in- all on top rope {rope comes from the top} and was getting the hang of it. However, the moment I went on lead { clipping the rope into anchors as you ascend} however confident and motivated I felt at the start, that motivation and confidence would immediately fade away on the lower crux. I was falling from the same place attempt after attempt after attempt. Immediately after that if I was to go on top rope I would be able to go till the top.

I was mentally having a really tough time. For four days I went through the cycle of coming at 6 am, climbing twice, failing miserably- each time at the same place, going back to the hotel, and resting. I was not able to get myself out of this!

Finally on our last day in Badami, when I had decided to give this route a last-ditch attempt I held that hold where I had been falling from and held the next and the next and cleared the lower crux. At that point, I had to remind myself, ‘Well, you may have cleared the crux but the top is still far away!’