My Experience @Samsara By Nirmayee Neve 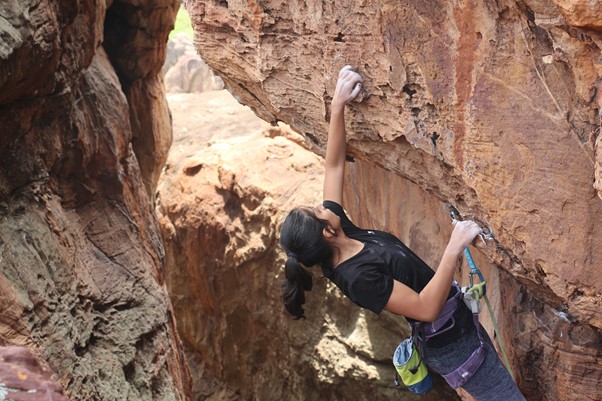 We were going for an eleven-day rock-climbing trip to Badami. I realized this trip I would get to work on my goal of completing Samsara. It is a 30 m vertical climbing route graded at 8a.

The route had two crux points- these are the hardest parts of the route where I fell over 50 times trying to figure out what sequence worked best for me. First two days I stayed on my project as long as possible and tried to figure out the moves. Finally, on the third day, I was able to link all the movements. Then, I tried the route on lead.

Lead climbing is when the rope is carried from down and as the climber goes up the rope is clipped in on to quickdraws. Therefore, if a person falls from 1 meter above the last quickdraw, the freefall through the air would be two meters. I had to overcome this fear in order to get an ascend of the route. An ascent is a continuous climb of the route from the bottom to the top.

On my first attempt on lead, I was very scared but knew this fear was irrational in most situations. On this attempt I climbed with no expectations, just wanted to see how far I would go. This climb was amazing, I was able to climb all the way to the second last quickdraw. I took a lead fall of 6 meters and realized it was completely safe.

After this climb, I felt the pressure build-up. Tomorrow, the fourth day was the last day I would get on the rock as we were leaving for another rock-climbing destination. I tried to calm my mind by just visualizing the route, the moves and the send.

In the morning, my mind was in conflict. I wondered if I make it to the same height as yesterday or have a demoralizing lead fall. I was worried if I would be able to make the ascent. However, I decided to give my best and climbed on the route.

I cruised the section of the first crux where I thought I might fall. As I reached higher, I realised I had already climbed through a major portion of the route and I could definitely finish the route in this attempt if I focused and tried hard.

As I climbed higher, I felt the breeze on my face and through my hair. I also saw a bird flying beside me. The monkeys in Badami were watching me from the big ledges. I could hear the ecstatic crowd cheering me from below. This gave me much confidence. It was almost as if they were experiencing the climb with me.
I am extremely grateful to the photographer who was hanging near the top of the route capturing magnificent pictures of every move like I was on National Geographic.

On the route, I was continuously thinking positively. I was recollecting the movements, convincing myself that I was well-rested and could finish the route in this attempt. While nearing the last rest before the top crux I realized that now, in the next two minutes I would send the route or fall and feel upset. I realized that I was super close now, I was well-rested and had the power to send it. I did the last crux comfortably and even the top clipping position felt better than ever.

All the pressure was released. I could feel nothing but the pure bliss of having completed something I really badly wanted for a long time.
Now, that I am recollecting this experience, I realize it was extremely rewarding and I will work hard and do it again in spite of all the fear and pressure I faced. Happiness in unimaginable because all the doubt goes away and you prove to yourself that you are capable and strong.

I believe projects for a rock-climber are game-changers and they definitely leave you with an amazing experience.